What Moral Foundation Theory gets wrong

Moral Foundations Theory is very popular with the media. Its creator, Jonathan Haidt, speaks to standing-room-only crowds around the nation. Our local, modest-sized public library owns ten (ten!) hardcover copies of his book, The Righteous Mind. In social psychology, it’s a Big Deal.

In a nutshell, Moral Foundations Theory says there are basic foundations that underlie people’s moral beliefs and values. The five foundations that Haidt and his colleagues have written about most often are:
Harm/Care (don’t harm people, take care of people, relieve suffering)
Fairness/Justice (treat people fairly)
In-Group Loyalty (support the value of the group you identify with, such as your nation)
Authority (respect traditional authority)
Purity/Sanctity (don’t do disgusting or unnatural things)

Interesting, huh? There’s a reason people are so excited about Moral Foundations Theory (MFT). It’s really appealing to be able to think and talk about the basic building blocks of morality, and Haidt’s book intriguingly relates his “foundations” to key aspects of human evolution. He also stands firmly in the camp of “moral intuitionism,” believing that people’s moral responses tend to be automatic, gut-level reactions. These reactions can contribute to more effortful moral reasoning, but they also shape our beliefs and behavior just on their own. I agree.

My problem with MFT is in how Haidt and his colleagues interpret their data – which, coincidentally, is what’s brought them so much publicity. The very first big finding from the MFT team is that conservatives make use of all five of the moral foundations, but liberals – supposedly – only care about two. Example: “…justice and related virtues (based on the fairness foundation) make up half of the moral world for liberals, while justice-related concerns make up only one fifth of the moral world for conservatives.” Basically, they’re saying that all five foundations are of equal weight, and conservatives are more morally complex than liberals.

In essence, the MFT team identified five basic building blocks for morality, but then, based on their survey data, they conclude that some of these building blocks don’t matter to a large group of people. And that’s just not so. Everyone who cares about right and wrong uses these building blocks, but many of them use them differently than the MFT researchers have studied with their research program. Let’s look at MFT more closely.

The “Moral Foundations” are biased
First, let’s start with the first two foundations, the ones pretty much everyone values: Harm/Care and Fairness/Justice. When designing their MFQ survey (the source of most of their data), the MFT researchers asked about these two foundations in a biased way. Nearly everyone, conservative or liberal, values not harming people and taking care of those we’re personally responsible for, but the MFQ focuses more on taking care of people more generally and animal welfare (two issues more associated with liberals than conservatives), and the MFQ leaves out protection entirely (which usually matters more to conservatives than liberals). In other words, the MFQ is asking people how much they agree with a liberal version of Harm/Care, rather than how much they care about Harm/Care in general.

Turning to Fairness/Justice, the same kind of bias appears again. Conservatives and liberals both care about treating people fairly, of course, but they tend to mean different things by it. Conservatives usually care more strongly about making sure people are repaid for their actions (especially their misdeeds), and liberals care more about equal opportunity and level playing fields. The MFQ focuses more on the latter and, again, is biased more towards the liberal end of the U.S. political spectrum.

And three of the “foundations” are actually about something else
The real problem with MFT, though, is the way they talk about the other three foundations, which they describe as the “binding foundations” that keep groups working together. When they ask their MFQ survey questions about loyalty, authority, and purity, they’re mostly looking only at one specific domain of behavior that matters primarily to social conservatives. The gist of their Loyalty and Authority questions is: Should we put our group ahead of both individuals and humanity at large (Loyalty), and rely on our group traditions when deciding what to do (Authority)?

The Purity questions also tie into this general theme of valuing the group. They ask how important it is to do things that are pure and decent, to avoid things that are disgusting or unnatural, and to practice chastity. They leave it to the reader to imagine the types of activities that might be impure, indecent, disgusting, or unnatural, but – at least for conservatives – the popular associations of these terms are readily evident. The MFQ Purity questions may not have been intended this way, but many survey respondents are likely interpreting them as asking about sexuality, that is, Reproductive Purity. This is primarily a concern for those who care about regulating both the conformity and (since sex can lead to babies) the membership of a group.

Essentially, the MFT “binding foundations” are really looking at whether or not people have moralized the idea of in-group integrity: putting the group first, relying on traditions, and worrying about unregulated sexuality like sex outside of marriage, homosexuality, and (especially in earlier generations) marriage outside the group.

In general, U.S. conservatives think that in-group integrity is a moral issue and U.S. liberals do not (although it turns out that liberals who attend church are more likely to agree with conservatives that this is important). That means the Moral Foundations people have done something specific with three-fifths of the MFQ questions: They’ve basically rigged their survey into an either/or test of whether you’re a conservative (or at least, whether you have “traditional” values). For the first two foundations, they ask how much you agree with liberal ideas, and for the other three, they ask how much you agree with conservative/traditional ideas.

As a test of conservatism, it’s a useful thing to have, and the MFQ is more friendly (less hostile or condescending) towards conservatives than some of the other surveys psychologists have used. But it’s simply not correct to claim that these three ideas (valuing in-group loyalty, respect for traditional authority, and promoting reproductive purity) are “foundations” on the same level with concepts like harm prevention and justice, when they’re really just asking people whether or not they’ve moralized one domain, in-group integrity.

Fortunately, the ideas underlying their Loyalty, Authority, and Purity can be salvaged. Not only can these three concepts be used to assess social conservatism, but when they’re reinterpreted more broadly, they can help us identify and understand a wide variety of moralized domains.

A more comprehensive approach
As I’ve shown here and here, the types of questions the MFQ asks about loyalty, authority, and purity can be used for numerous domains, not just in-group integrity. Here’s an illustration of how the “moral foundations” can be mapped onto my “moralization steps.” 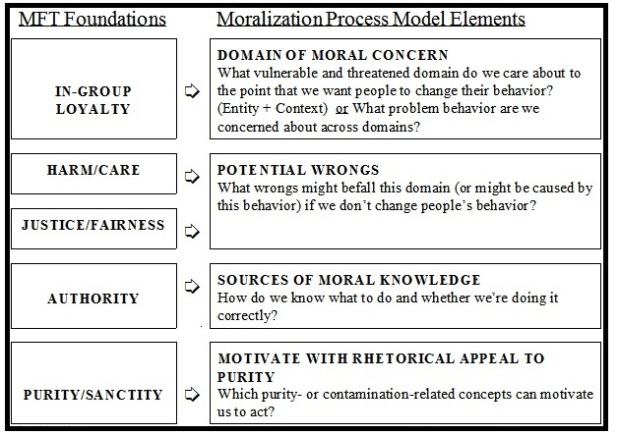 MFT’s Loyalty becomes just one domain of moral concern, something people might care about and want to moralize. Harm/Care and Justice/Fairness are examples of wrongs that might befall a domain (though in the MFQ, remember, they’re asking about these as they apply to individuals, not a domain – it’s part of their liberal bias for these two foundations). Traditional Authority is just one instance of where one might go for moral knowledge, and Purity/Sanctity can appear in many, many contexts beyond chastity, indecency, and “unnatural” acts.

I’m basically reinterpreting the ideas underlying MFT in a way that’s much broader and much more useful. With my model, you can study any moralized topic, see how its proponents have used the steps, and consider whether they’re oversimplifying things when appealing to “purity” and whether a more complex take on the topic would be more reflective of reality.

Or, if you really wanted a thorough model of people’s moral intuitions, you could create a survey that asked about dozens of “foundations” in sets of three: one to establish a domain as important and threatened, one to show what types of authority people tend to respect where this domain is concerned, and one to bring in the “purity” motivator. I don’t think this would be all that practical, but it would help overcome the biases in Moral Foundations Theory.

If you want to take the current version of the MFQ yourself, you can do it at the Moral Foundations Theory website, yourmorals.org.

I'm a research psychologist at Oregon Research Institute, and I'm writing a book about meta-narratives, the powerful collective stories we share about who we are and where we're headed. My interests include beliefs and worldviews, ethics, motivation, and relationships, both among humans and between humans and the natural world.
View all posts by Laura Akers, Ph.D. →
This entry was posted in Uncategorized and tagged moral psychology, purity. Bookmark the permalink.

3 Responses to What Moral Foundation Theory gets wrong