“The only thing we have to fear…”

International terrorists are trying to ratchet up our fear. They’re devoting their lives to getting us to invest a lot of energy into making ourselves far more secure (in one specific dimension or another) than rationally called for. They’re working hard to make us distrust ordinary, often middle-class people from countries with different customs from ours but surprisingly similar beliefs and values.

Our own politicians are trying to ratchet up our fear too, and I don’t even need to give examples.

We’ve got domestic terrorists, who want whatever it is they want and have the means to try to get it… or at least to make loud, despairing statements about it by murdering people whose skin color or beliefs or proximity to something that bothers them puts them in their path at the wrong time.

Then there are random trolls on the Internet who get a kick out of fear and threats and drama, turning communities into hostile spaces, trying to shut down others’ voices.

Regular folks, our cousins and our neighbors, seem to partake in this fear. We hear them calling for strong leadership! Impenetrable borders! Or at a minimum the continued ability to attempt to defend themselves with far more powerful weaponry than they’d need to take down their annual quota of deer and game birds or to scare off a burglar…

Even powerful police officers, armed to the hilt, become infected by this fear, shooting unarmed people, some of them children, whom they forget that they’ve sworn to protect.

An epidemic of fear
Our country has been hit by an epidemic of fear, some of it deliberate, most of it a natural consequence of the contagiousness of fear. Many people are innately afraid of other people. Often they have good reason to be. Feeling threatened makes all of us more conservative, less open, than we’d otherwise be.

In the long term, this kind of fear runs its course, and we get to have 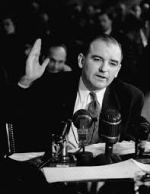 stability and a greater degree of mutual trust and tolerance again. But if people think they’re benefitting from this climate of fear, and if they can see what works to ratchet it up again, then they may keep at it. We saw how that worked for Senator McCarthy, and we saw how that worked in 1930s Germany. We don’t want that here and now.

The strategy I see most often, at least in social media, pretty much amounts to some combination of appealing to reason through facts and figures, and exasperated ironic comments that probably come across as ridicule. This strategy may help to innoculate those who aren’t already infected with fear, to bolster whatever immunity we have, but facts and figures can’t beat emotion that’s already inflamed, and ridicule and scorn certainly can’t either. The result is yet more polarization. What we really need is a strategy that works for all of us, not those of us who aren’t yet afraid, because eventually we could find ourselves in the minority, and history tells us what happens when fear takes over.

We know that empathy can work, on an individual level – if you know and like someone who’s a typical member of That Group, the rest of them may not be so bad. But the part about “typical” is important. I’ve long thought that Family Feud, bringing hundreds of regular, ordinary, friendly families of color onto the TV sets of America, may have done more to improve race relations than the achievements of any of the many African American athletes and entertainers, because the latter are all special, exceptional. If we think someone’s exceptional, we don’t generalize. That friendly Arab grocer you’ve known for years isn’t like the other Arabs, right? He’s different, he’s an exception. For one thing, unlike most Arabs, he lives down the street from you, and he speaks English and knows your name. You like him just fine, but the rest of them are still whatever scary thing we imagine Arabs are. But if you know dozens of Arabs, in their infinite variety, going about their daily lives, in times of peace? Now a random Arab is not so scary.

How about the people out there who actually are out to do us harm? A few of them are, sure. That’s always been the case. What can we do to reduce the odds that they’ll attack us? Okay, so, one obvious strategy is not to go romanticizing them with rhetoric about a war on terror, or a clash of civilizations, or other language that plays into their desire to be seen as hugely significant. This meaning, this dramatic significance, is the main reason they have for doing these things. So? Take it away from them. Criminals! Make them criminals, not soldiers or martyrs in a war for the hearts and minds of their people. True, they might harm us. But fear harms us too.

What else? Can we do something to dampen down the fear itself? Something reassuring? Can we channel the fear constructively for the public good, resisting the tendency to draw inward and hunker down? Could we appeal to bravery somehow? A lot of people who think in terms of “us versus them” also think in terms of heroism and bravery. Would a call for bravery help them move forward? I don’t know how that would work in practical terms, but maybe? World War II was scary, but there was a sense of everybody pulling together toward a common cause – can we find one of those?

Our top priority: Fear itself
I’m sure there are a lot of things we should be doing to reduce the climate of fear. These are just thoughts off the top of my head. The main point I want to make is that we ought to be putting this issue, this “problem of fear,” at the forefront of our national dialogue on how to move forward from where we find ourselves. Then we can start directing our resources toward things that are more important.

We ought to be able to focus our resources on things that are statistically more likely to hurt people, like addiction and cancer and depression and air pollution. We should also be focusing our resources on issues that could destabilize our country and the whole world. Right? My agenda would include global climate change, which could make millions of people homeless and destitute, and systemic issues that perpetuate economic inequality, making people frustrated and denying us the productive contributions of millions of people who could and would do more for us, given the opportunity and a fair playing field. These are real, large-scale problems.

Your agenda may be different, which is fine. But we should be debating agendas based on creating the long-term futures we want, all of us, together. If your agenda is best supported by making people afraid, then maybe it’s immoral and you should rethink it. And for now, at the top of our national agenda, we should be shutting down the fear factor.

I'm a research psychologist at Oregon Research Institute, and I'm writing a book about meta-narratives, the powerful collective stories we share about who we are and where we're headed. My interests include beliefs and worldviews, ethics, motivation, and relationships, both among humans and between humans and the natural world.
View all posts by Laura Akers, Ph.D. →
This entry was posted in Uncategorized and tagged cognitive framing, collective resistance, motivation, politics. Bookmark the permalink.