Irony can be a lot of fun.  And it’s everywhere, from the most scathing sarcasm to the gentle wit of Kermit the Frog. We love to laugh at satire and parody.  The “mockumentary” has become a popular film genre – a few weeks ago we greatly enjoyed the vampire satire, What We Do in the Shadows.  Yet there are some contexts in which irony may be altogether inappropriate and a serious problem for democracy.

Let’s start with definitions.  Irony requires us to have at least two levels of awareness.  There’s what we literally see and hear (or read).  Then there’s also a secondary level of meaning, more sophisticated, requiring familiarity with additional, unspoken knowledge.  That’s why irony is so popular with teens and young adults – appreciating it lets them show that they’re familiar with that deeper layer of knowledge.  Not only is irony fun, it’s also a metaphorical badge of mastery.

(This also, incidentally, probably explains why the fabulous Northanger Abbey is the one of the least popular of Jane Austen’s novels today – it’s a satire on a whole genre of popular Gothic romances that were familiar to readers in her time but not so much in ours.  But those of us who like it can claim membership in a particular in-group.  We “get” it.)

Irony is probably our best answer to when people are too caught up in, or loyal to, a way of thinking that discourages critical reflectiveness, what I elsewhere call a “full immersion mindset.”  Sometimes our “bubble” or “echo chamber” can do great harm, like when it gets involved in excessively Romanticizing a people’s situation – like lamenting the tragic loss of their beautiful history at the hands of some other group – that classically motivates those people to violence.

But irony can help.  The marvelous satire Monty Python and the Holy Grail illustrates this neatly.  Once you’ve laughed along with Dennis the Peasant’s shocked argument that “you can’t expect to wield supreme executive power just because some watery tart threw a sword at you!” well, that’s that.  You may still appreciate the considerable beauty in historical and modern-day Arthurian literature – but I suspect you’d be singularly resistant to recruitment by a future Militant Avalon Resurgency.

This harmful type of Romanticizing is at the root of America’s alt-right movement. Certainly you and I are in no position to make jokes about Nazis that would actually change these people’s way of thinking, but we can hope that eventually, insiders they respect will wield a harsher, scathing irony to some effect.

(Harmful Romanticizing is not unknown on the Left either, but lately it’s much more likely to result in property damage than death counts.)

All this serves as background for why I found the recent NYT article “How President Trump Ruined Political Comedy” to be both fascinating and troubling.  The author is Dan Brooks, whom I should note is not the NYT’s David Brooks, but rather, a journalist from Montana.  He begins by explaining why the satiric liberal talk show has actually declined under the Trump presidency.  In an interview with Brooks, the showrunner for The Daily Show put it like this: “We have to signal to the audience, ‘Hey, we know how you’re feeling,’ so it doesn’t seem like you’re making light of a serious thing.” As Brooks summarizes, “Consumers of this brand of comedy are so horrified by Trump that irreverence can feel like betrayal.”

This explanation is valuable in its own right, but then Brooks goes on to explain what many of us have failed to understand about Donald Trump:  Rather than immersing himself in the presidency, he’s just playing the role, as a comedian.  “In his love of insults, his penchant for hyperbole and his commitment to shtick — that knowing performance of himself that blurs the line between personality and persona — Trump is unprecedented among American presidents.”

I’ll quote Brooks at length for a bit here.  “The most striking feature of his rhetorical style is how much it resembles that of a nightclub comic. He is known to work out material on the road, presenting rally audiences with variations on the same bits until he develops something that works. The idea of a border wall with Mexico is rumored to have emerged from this process. His unhurried delivery — which eschews setup/punch rhythms in favor of a meandering conversation with the audience, punctuated by audacious remarks — calls to mind a late-career Don Rickles. Unlike Rickles, though, Trump rarely laughs. He delivers his jokes in the same tone he delivers serious remarks. The insult comedian always ends by telling his victim he’s a good sport, but Trump doesn’t offer such signals.

“In October 2019, for example, he tweeted a photograph of himself giving the Medal of Honor to a dog. This event did not happen. The conservative website The Daily Wire created the image by photoshopping Conan, the U.S. Army dog that helped kill Abu Bakr al-Baghdadi, into an existing picture of Trump awarding the medal to the Vietnam combat medic James C. McCloughan. On the Louder With Crowder website, the writer John Brodigan ridiculed The Times and the CNN White House correspondent Jim Acosta for reporting that the image was doctored, writing, “You’d have to be an idiot to think this actually happened in real life.” But the president gave no indication that the photo was a joke; he simply tweeted “AMERICAN HERO!” and the picture. A close acquaintance of mine, who is not an idiot, saw the photo on Facebook and assumed Trump had in fact given the medal to a dog. She thought it was absurd, but she did not assume it was ironic, because what previous American president has disseminated fake pictures of himself performing official functions?” 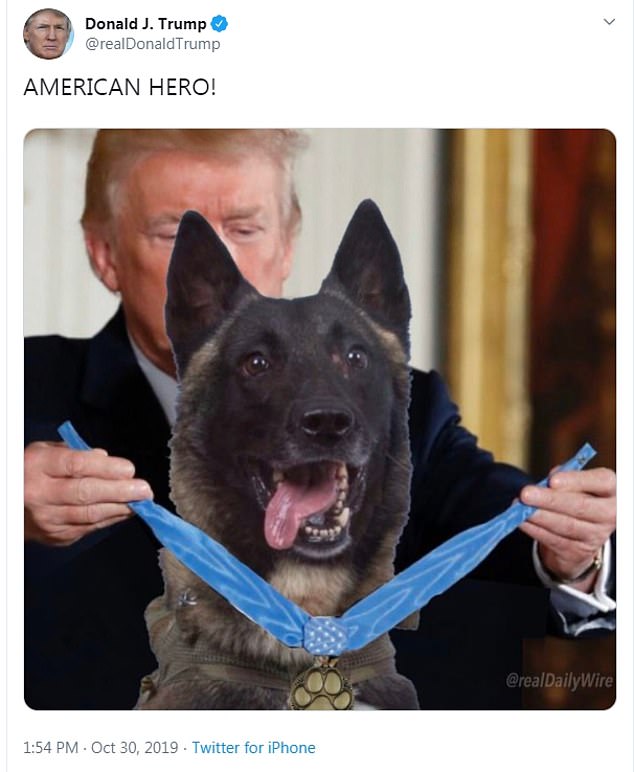 If Brooks is right, this means that Trump has been working both ends.  On the one hand, we have the hyper-sincere MAGA faithful, the evangelical Christians, and everyone who’s admired his “straight talk” and “telling it like it is.”  This group takes what he says at face value and appreciates it.  On the other hand, we have the right-wing audiences who appreciate his irony – it lets them feel like privileged insiders and gives them a “parasocial relationship” with him, a way of feeling they really know the man, and it also lets them delight in watching the “libtards” stupidly taking him seriously.  The rest of his supporters, I suppose they don’t always believe what he says, but they like the resulting policies so they privately roll their eyes and hope for the best.

Brooks again: “The real Donald Trump acts as if he’s doing an impression of some normal-looking, occasionally self-aggrandizing president we don’t know about. His supporters know this impression is fake. They don’t think Trump is the guy he pretends to be; they know he is the guy who pretends to be that guy, which is a hilarious thing for the president to do.”

Especially key to Trump’s style is his use of “ambiguous irony” – saying something that might be sincere or might be humor, without signaling which it is.  Brooks explains that this is what was going on with Milo Yiannopoulos. “The conservative brand of ambiguous irony looks to create asymmetries in how insiders and outsiders interpret what is being said, so that any statement that gets too much blowback can become someone else’s failure to take a joke.” … “At a moment when American conservatism is flirting with ideas that have been outside the realm of mainstream politics for 50 years, ambiguous irony has allowed both political comedians and pundits to say what cannot be said.”

We can see this in action in a speech Trump gave in September, when he suggested he might use an Executive Order to prevent Biden from winning the presidency.  It’s horrifying on the surface, but when you read what he actually said, it’s clear he was joking (although also possibly testing the waters to see whether to consider it for real?).

And apparently he doesn’t always know how to turn it off, like the joke about injecting bleach – not only was it a singularly ill-judged joke to make, considering how credulous some followers are, but why would a pandemic briefing ever be a time for a joke of any kind?

So this is our problem.  If irony, the outsider’s best tool to critique a government, is instead co-opted by the highest level of leadership, what recourse do the people have?  I should note that this is not exclusively a Trump problem, it’s an anybody problem.  Should we add “sincerity” to our list of essential criteria for judging U.S. presidential candidates?  And given how suspicious we have all become of the “other side’s” motives, how could we even tell?

I’m writing a book on this topic, and publishers like their authors to have followers.  If you liked this post, and you’d like to get an e-mail when I make a new post, please “follow” the blog, using the button at the top of the right-hand column.  Thank you!

I'm a research psychologist at Oregon Research Institute, and I'm writing a book about meta-narratives, the powerful collective stories we share about who we are and where we're headed. My interests include beliefs and worldviews, ethics, motivation, and relationships, both among humans and between humans and the natural world.
View all posts by Laura Akers, Ph.D. →
This entry was posted in US politics and tagged irony, meaning, politics. Bookmark the permalink.